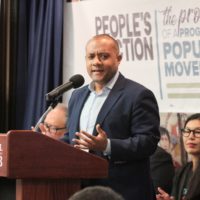 For Our Future Fund

Garrett Arwa is the current Chief of Staff for For Our Future and For Our Future Fund. In that role he oversees several departments critical to the FOF mission. Prior to serving in this role, Garrett Arwa as the National Political Director of For Our Future Fund and created the FOF partnership program; FOF’s vehicle for working with community-based organizations across the country. He also managed FOF’s federal issue advocacy portfolio and engaged national progressive organization to foster coordination as it pertains to FOF states. All with the ultimate goal of build long term relationships that translate into better coordination and building of power at the state and local level.

Prior to this role he serves as the Director of Engagement for NextGen Climate in San Francisco, where he managed four state operations, several national partnerships centered around clean energy issue advocacy, and engaged progressive organizations at every level to build 2016 electoral operations.  His work at NextGen lead to his work with FOF.

Prior to that he spent seven years working at many levels of politics and advocacy in Michigan. He served as the Executive Director of the Michigan Democratic Party from 2013-2015. He served as the Constituency Director for President Obama’s re-election campaign in 2012 and also ran the Michigan Coordinated Campaign in 2010 and 2012. He was the State Director for Organizing for America under the DNC where he organized around Health Insurance Reform and Wall Street Reform in 2009 and 2010.

Garrett got his start in politics working in 2007 and 2008 to get President Obama re-elected. This included primary campaigns in NH, GA, and TX, as well as working in Florida for the general election. He also worked a Congressional Special election in 2009 in NY-21.

Garrett is a proud Syracuse Orangemen with a Master’s degree in International Relations from the University of New Hampshire. His father is from Tanzania, his mother was born on an army base in Guam, and his parents met in the Peace Corp in Nairobi in the late 1970s. He has a sister who lives in Jackson MS and another sister who is doing a fellowship in Arusha Tanzania.  Go Patriots, Celtics, and Red Sox!