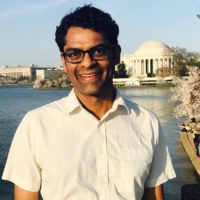 Prior to his work on civic engagement, Ashish led organizing, advocacy and communications efforts for nuclear arms control organizations. In 2009, Ashish co-led the national field campaign which resulted in the successful ratification of the New Strategic Arms Reduction Treaty between the United States and Russia. He worked to advocate for the peaceful resolution of conflicts, lobbied on Capitol Hill against destabilizing nuclear weapons programs, and represented peace activists at the United Nations in support of multi-lateral negotiations on arms control issues.

Since joining FCCP in 2015, Ashish has helped contribute to an expansion and deepening of FCCP’s programming through his work on the Annual Convening, the briefing series, and through his leadership on the Theory of Impact and State Circles.

When not at FCCP, Ashish can be found exploring the world through impromptu trips and his library card.