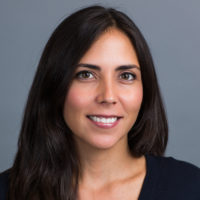 The daughter of immigrants from South America, who made South Florida home, Andrea has been organizing in communities of color and immigrant communities for over a decade. Andrea is one of the co-founders of the National Domestic Workers Alliance and led the California Domestic Worker Coalition, a statewide effort to include domestic workers in labor laws, which successfully passed Domestic Worker Bill of Rights Legislation in 2013, seven states have now passed similar legislation. She went on to lead nationally recognized campaigns for immigrant and worker rights such as We Belong Together, and the 100 women 100 mile pilgrimage for migrant dignity.

She was the Political Director and Lead Organizer at Mujeres Unidas y Activas (MUA), a grassroots Latina immigrant women’s organization in the San Francisco Bay Area for eight years, organizing around domestic violence, immigrant rights and economic justice. Previously, she lived and worked in Bahia, Brazil with IPETERRAS, a sustainable agriculture and farmworker rights project. Andrea is raising her daughters in South Florida and fighting for their future.