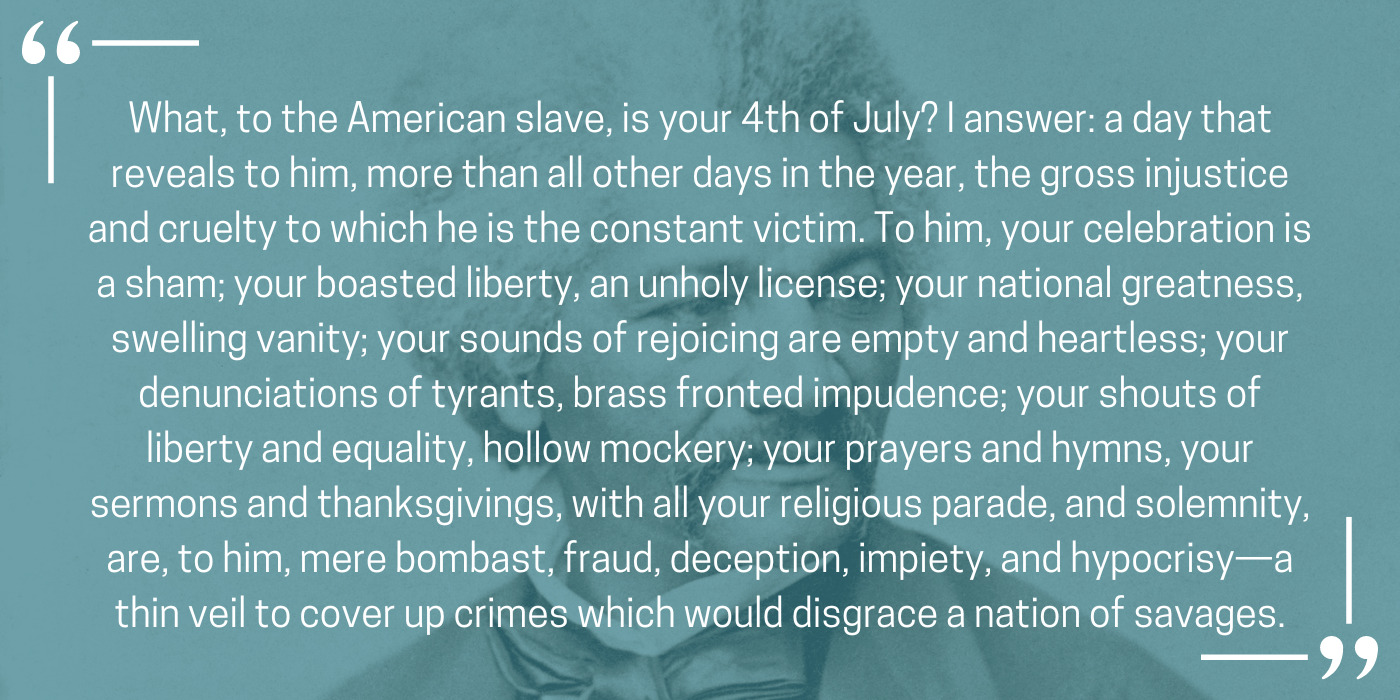 Today, I sit pondering what, to a Black American woman like me, is this 4th of July? After decades of civil rights progress, this nation has reversed course. The white-lash to the Obama presidency began before he had even left office, with Senator McConnell blocking President Obama’s March 2016 nomination of Merrick Garland to the Supreme Court. The GOP then nominated and the nation elected racist, misogynist Donald Trump to the White House. It’s been downhill since.

Over the past week alone, the Supreme Court’s conservative majority demolished the Constitution’s separation of church and state, in one case striking down a Maine law banning the use of public funds to pay tuition at private schools that provide religious instruction, and in another ruling in favor of a public high school football coach who lost his job for leading post-game prayers with players at the 50-yard line in violation of school policy.

In another landmark decision last week, the Court struck down a New York handgun-licensing law that required those wanting to carry a handgun in public to show a special need, setting a new legal standard that will make gun control laws much harder to defend. The Court’s six conservatives also severely weakened criminal defendants’ rights last week in a ruling that violation of Miranda rights does not provide a basis for monetary damages in a civil lawsuit against the police.

The most profoundly damaging of all was the Court’s 6-3 Dobbs decision overruling Roe v. Wade. The Court will kill women and others with this decision, which not only strips women of a longstanding constitutional right, but also contains the seeds for revocation of other civil rights won over the past half-century. The Court held that when a right is not explicitly referenced in the Constitution, it will only be protected if it is “deeply rooted in this Nation’s history and tradition” and “implicit in the concept of ordered liberty.” The Court concluded that the “right to abortion does not fall within this category.”

We don’t need to wonder what rights conservatives are coming for next. Justice Thomas told us in his Dobbs concurring opinion. Thomas wrote that “[b]ecause the Due Process Clause does not secure any substantive rights, it does not secure a right to abortion. … [I]n future cases, we should reconsider all of this Court’s substantive due process precedents, including Griswold [contraception], Lawrence [private consensual sexual acts], and Obergefell [same-sex marriage]. Because any substantive due process decision is ‘demonstrably erroneous,’ we have a duty to ‘correct the error’ established in those precedents.” (Notably absent from Thomas’ list is the Court’s 1967 Loving decision that recognized a constitutional right to interracial marriage—not surprising given that Thomas has an interracial marriage. But Loving rests on the Due Process Clause, just like the other cases he lists.)

This nation was founded by and for wealthy, white men and has no “deeply rooted … history and tradition” of civil rights for the rest of us!

So what next? Giving up is not a luxury we can afford. Lives are at stake. But what we’re doing isn’t working. We can’t keep showing up to civic participation work the same way we have been. Progressive funders need to adopt the tactics that conservative funders have used in recent decades to such great effect.

Philanthropy needs to support civic participation work 12 months a year, every year—and end the practice of focusing resources in the months before an election in the jurisdictions deemed “battlegrounds” in that specific election.

Philanthropy needs to fund grassroots, BIPOC led and BIPOC community serving organizations. We’re not going to lawyer our way to restored civil rights with this Court and its “deeply rooted history and tradition” legal regime. Organizing and mobilizing the masses must be the foundation of our movement going forward. And doing this critically important work takes money.

Philanthropy needs to deliver this support to the grassroots with multi-year general operating grants. For too long, grassroots organizations have relied on small, short-term budgets, hamstrung in their efforts to provide the type of job stability that induces long-term commitment and development of expertise among activists.

And philanthropy needs to ramp up political engagement through perfectly lawful, but too-commonly avoided, nonpartisan 501(c)(3) and 501(c)(4) policy advocacy and election work.

We have to do better. We have to do differently. We have to, paraphrasing Langston Hughes, keep fighting to build the America that never has been yet—and yet must be—the land where every person is free.