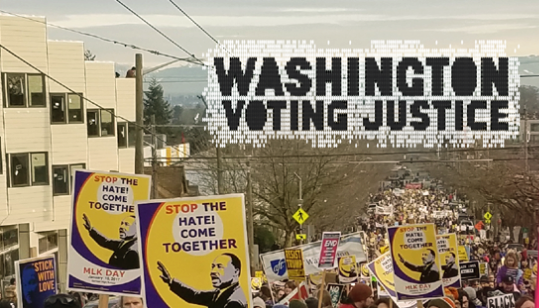 This event is open to funders and invited speakers only.

RSVP here. Please indicate if you will join in person or via webinar.

Progress Alliance of Washington, the Seattle Foundation, and Funders’ Committee for Civic Participation (FCCP) invite you to join us for a 501(c)(3) funder briefing on the opportunity to expand voting rights in Washington State.

Despite the Northwest’s progressive reputation, our state has not lived up to promises of protecting and defending voting rights for all people. Young people and people of color vote at far lower rates than the overall population and experience real barriers to participation, including a lack of in-language materials for our rapidly growing immigrant communities — which make up 15% of the state population and a growing part of the electorate.

The Washington Voting Justice Coalition‘s mission is to build and sustain a movement that increases civic participation by changing the power structures that deny certain people meaningful access to having their votes counted and their voices heard in our democracy. Their goal is to pass statewide policy that expands access to voting in Washington state through automatic voter registration, pre-registration for young people, same-day voter registration, postage paid ballots, increased language and disability access, and more.

Hear directly from members of the Washington Voting Justice Coalition about: