FCCP is excited to announce that Congresswoman Rashida Tlaib will join us for keynote remarks on the first evening of our convening, November 19. Congresswoman Tlaib is a proud Detroit native, committed to improving the lives of the people around her, or as she says “a mother working for justice for all.” Learn more about Congresswoman Tlaib below and join us at FCCP’s 2019 Convening. 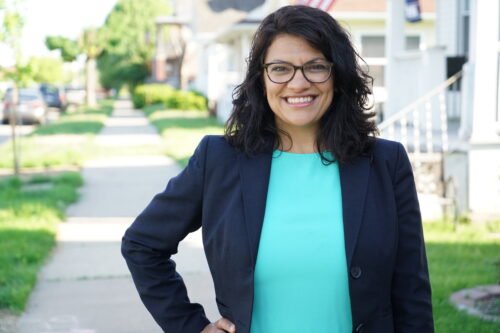 Rashida Tlaib is a well-known progressive warrior and, in her own words, “a mother working for justice for all.” Her two young sons are at the root of her unwavering passion to help change lives for the better. She is the oldest of 14 children, born and raised in Detroit, the proud daughter of Palestinian immigrant parents.

Rashida made history in 2008 by becoming the first Muslim woman to ever serve in the Michigan Legislature. She is beloved by residents for the transformative constituent services she provided, and for successfully fighting the billionaires and corporations that tried to pollute her district. When families get to know Rashida, they have no doubt that she will work tirelessly to knock down barriers for real change, and whether by policy or action, she will roll up her sleeves to make sure her residents are cared for, no matter how big the challenge.

When billionaire slumlord Matty Moroun refused to follow the law and get polluting semi-trucks off neighborhood streets, Rashida organized residents with the We Have A Right To Breathe campaign and forced Moroun to fulfill his obligations to protecting public health. When large piles of black dust started showing up on the Detroit riverfront and blowing into homes and parks, and the Michigan Department of Environmental Quality told residents everything was fine, Rashida collected samples and got the substance tested herself – exposing the cancer-causing “petroleum coke” as a threat, and getting it removed.

As an attorney at the Sugar Law Center for Economic and Social Justice, Rashida took the movement to the courts, fighting racist emergency managers, abusive state agencies, and leading the fight for community benefits agreements that promote equitable development. Rashida knows that effective advocacy requires an all-out approach, fighting in the community, in the legislature, and in the courts every day against injustice and inequality, so that every single person in this country has a chance to thrive.

She is currently the Congresswoman for Michigan’s 13th Congressional District, which includes the city of Detroit and many surrounding communities, where she serves on the Financial Services and Government and Oversight Committees.